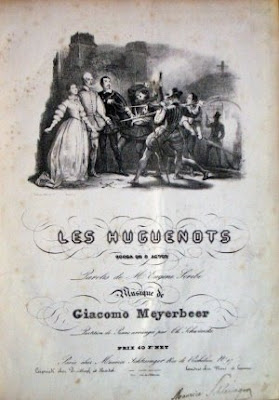 The Queen’s aria which opens the second act is cast in the form of a slow first section ‘O beau pays’, a middle section with Urbain and female chorus and a cabaletta ‘A ce mot tout s’anime’. None of the versions on 78s contain the complete music and several singers only recorded the first section. Among these there is, surprisingly, only one poor version, namely that by Maria Galvany (PD 053164) who sings without style and with a disturbing lack of repose. Better efforts include those by Antonia Nezhdanova (HMV 2-23317; CO 366), which is most artistic if a little white in tone; the great Lilli Lehmann (Od. 50394; CO 385), who provides finely graded, authoritative singing, but the timbre is, alas, rather sour; Hempel (HMVAGSB 59; CO 302) is stylish but not particularly accurate, with a characteristic white-toned top D inserted in the cadenza. Hedwig Francillo-Kaufmann (Gramm. 2-43210; CO 356) exhibits a pa:iticularly fine trill, and she sings the air with great refine¬ment lacking only the ultimate in distinction; Irene Abendroth (G&T 43249; Rococo 5297) demonstrates the suitability of a Lamperti-based technique for this music and includes stylish ornaments. Unfortunately the unstable speed of the primitive re¬cording does her a grave disservice, playing havoc with the pitching. A prevailing impression of flatting also mars the pleasure in a limpid tendering by Emilie Herzog (G&T 43863; CO 418) due, possibly, to the loss of natural overtones in the voice through the acoustic recording process. Claire Clairbert (Poly. 66920), the pre-war star of La Monnaie, supplies good clean singing in the slightly steely inter-war Gallic style, but her version is highly accomplished with a noteworthy trill; Alexandra Dobrovolskaya (Mus Trest 06005),in on a rare electrical recording with piano accompaniment, fascinates in a performance of great character and charm. The voice has lost some of the freshness and beauty evident on her G&T recordings, but this remains a lovable version – as indeed is that by Giuseppina Huguet (G&T 053072; GV 68) whose poised, clean singing demonstrates all the virtues of the old Italian school. Two of the finest versions are contrasted in style.

For sheer classical musicianship allied to great tonal beauty, all three of the records made by Alice Verlet, the great star of the Paris Opera, are recommended (Pathe 4861, Edison 82090 and HMV 33678; GV 18) though the HMV is marginally the finest. Kurz’s version (G&T 43886; Rococo R37) is wayward in the extreme but such is the fascination and authority of the singer that one is charmed into submission, whilst the lazy ease of her coloratura suits the dreamy, reminiscent mood of the music to perfection.

Four versions manage to contain both aria and cabaletta on one side and three of these, alas, must be speedily dismissed. In Luisa Tetrazzini’s case (HMV VB 41; CO 344) the attempt to cram the music, heavily cut of course, onto a single side results in a rushed tempo that totally destroys the atmos¬phere of the slow section. 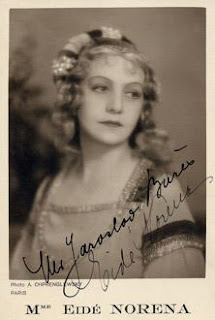 Although Eide Norena (Od. 123636; LV 193) avoids this fault and manages a lovely opening, she ruins the cabaletta with strings of intrusive ‘h’s. Conversely Lucette Korsoff (Edison FS 889) redeems an opening beset by intonation problems with a fleet and dazzling finale. Only Gabrielle Ritter-Ciampi (Pathe 0405) succeeds in offering a poised and suitably languid opening in conjunction with a sparkling cabaletta – albeit severely reduced in length. Double-sided versions include Marie Michailova (G&T 23468, PD 2-43070 the aria, Berliner 23093 the cabaletta) whose ‘pre-dog’ version of the aria (reissued on GV 26) is to be preferred to the piano-accompanied early version although both are excellent and display a lovely quality of voice. Her cabaletta is highly accomplished too, if lacking true brilliance. Esperanza Clasenti (Fono. 39499/500) has a typically bright Spanish voice of attractive timbre but lacks a first-class trill; Giuseppina Finzi-Magrini (Fono. 39677/8) sounds a fine singer of the second rank; Yvonne Brothier (HMV W 1086), is, alas; quite out of voice. Lily Dupre (HMV 033158/9) is interesting for her inclusion of more of the score than any other; she sings well throughout and offers a particularly thrilling cabaletta – only the lack of a truly sensuous tone keeps this out of the highest grade; Deborah Pantofel-Nechetskaya (USSR 15792/3) has a white, very small voice strongly reminiscent of that of Miliza Korjus but her technique and musicianship are exemplary (she manages the staccati more accurately perhaps than anyone else) – ultimately, however charming, she lacks the authority required for this part.

There are three versions of outstanding merit. Hempel (Od. RO 524; CO 302) improves immeasurably on her HMV effort. Of all the sopranos she decorates most elaborately but always with fine taste and in the correct style. Since all Meyerbeer’s other requirements are met, it is difficult to imagine that he would have objected to decorations as elegant as these. This is poetic – and beautifully contained singing. 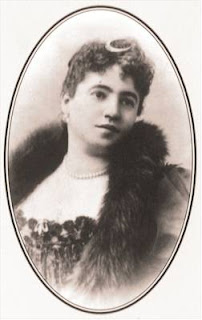 Olimpia Boronat (HMV SIP 1516c and PD 053187; Club 99.3) is wayward, even eccentric, but what character is conveyed — the whole performance has a command that only the truly great singers’ possess. Finest of all, perhaps, is Margarete Siems, the original Marschallin (Parlo. P 246; Rococo R20) whose version is easily the most elaborate but who sings with indolent grace and effortless bravura. When this is allied to a meticulous attention to dynamic markings, it has the expansiveness and grandeur of style that this music requires. Before leaving this aria, mention must be made of a Mapleson cylinder (IRCC 5002; VRL 50365) taken at a performance of the opera on 11 March 1901 at the Metropolitan Opera House. There is some controversy as to whether the Marguerite de Valois on that occasion was Nellie Melba or Suzanne Adams. To my ears it is Melba even though none of the famed soprano’s commercial recordings approach the abandon and brio displayed here. Whoever it was can be heard singing, with the greatest possible brilliance, almost the entire cabaletta, transcending the primitive medium, before the audience erupts into an enormous and well-deserved ovation 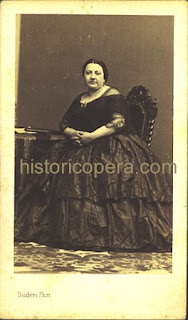 The Page’s second aria ‘Non, non, non, vous n’avez jamais’ was written for Marietta Alboni and has rarely been recorded; There is a four-square version by Zara Dolukhanova (USSR 21859) and a very fine, unpublished one from Eugenia Mantelli (Zono I 16526x Marston CD 52053-2) which is charming and easily upholds her legendary reputation. The only other heard is by Parsi-Pettinella (Fono. 39646; Club 99.106) which is both expressive and accurate, also with a moderate measure of charm.

The fine duet for Raoul and the Queen has been recorded in both single-sided (invariably cut) and double-sided versions, but Leo Slezak (G&T 3-42375; CO 309) manages to fill a 10-inch side with Raoul’s opening solo. The leisurely tempo he is able to adopt allows him to produce some of his finest singing in this role and demonstrates forcibly how careful one should be in judging singers only from these early recordings. When the tenor is joined by Elise Elizza (G&T 044024; Rococo 52) the necessary increase in tempo results in unlovely tone and little nuance, although it must be admitted that the soprano manages to provide singing of great beauty and elegance. The heavily cut version by Alexander Davidov and Marie Michailova (G&T 24395; GV 26), despite one or two delightful touches from Michailova, allows neither singer to show to advantage. Urlus and Cato Engelen-Sewing (Pathe 30235) sing well, though again the performance is rushed and not exactly helped by the Dutch translation. Affre and Landouzy (Od. 56161; GV 38) combine in an idiomatic and stylish rendering, the tenor, particularly, sound¬ing both heroic and important. Two normally excellent singers – Andrejewa von Skilondz and Marak (Gramm. 3-44098/9) are in indifferent voice and produce a thoroughly perfunctory version. However Siems paired with Desider Aranyi (G&T 044034; Rococo R41) sings superbly with scintillating brilliance while her partner provides sensitive support of a more heroic nature than expected. The voices blend particularly well in a virtuoso performance. The only version found in Italian is that by Giuseppina Huguet and Jose Maristany, both Spaniards (G&T 54029). The tenor is merely adequate and of provincial calibre but the duet is cut so as to remove most of his contribution and one may thus enjoy the stylish, graceful, cultivated singing provided by his accomplished partner. It is perhaps fitting that the fullest version of the duet is also the finest – that by Jadlowker and Hempel (Od. 76902/3; CO 395). Apart from some whiteness of tone from Hempel, this version approaches the ideal for all the dynamic markings are scrupulously observed and the performance has the utmost delicacy and elegance. 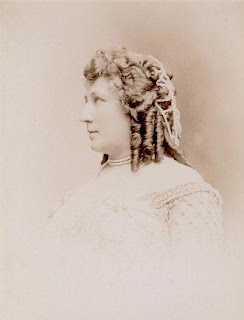 Thirteen versions of the duet for Valentine and Marcel ‘Derriere ce pilier’ have been located. Three of them feature the fine bass Andreas de Segurola who sings with Isabel Grassot (G&T 54030/1), Maria Grisi (G&T 54331) and Cecilia David (PD 054184). He is wonderfully expressive in all three and it is to be regretted that Grisi, who easily steals the soprano laurels, has to be content with the most heavily cut version. It is the unsteady tone of the soprano which ruins the otherwise excellent version by Juste Nivette and Amelia Talexis (Od. 60644/651) for the bass, as always, is magnificent. Likewise it is a lack of authority on the soprano’s part, which lets down an otherwise more than adequately sung version by Leon Rains and Riza Eibenschutz (Gramm (2-44436; CO 402). Andre Gresse and Marie Lafargue (Gramm. 034183/4; IRCC L7038) sing acceptably in the correct style but, although both possess fine voices, the final result is unmemorable. Like de Segurola, Hesch made early recordings of the duet with three different sopranos Sophie Sedlmair (G&T 044028; Rococo 5377), Elsa Bland (G&T 044070; CO 317) and Betty Schubert (Od. 38083). Amazingly it is the relatively unknown Betty Schubert who makes the greatest impression with firm, even-scaled, authoritative singing and. a superb trill. Bland sings with finer style than Sedlmair whose uncharacteristically poor attack on certain notes reduces what is otherwise a commanding performance. Needless to say Hesch sings superbly on all three versions but sounds especially solid and impressive on the Odeon disc. Another two, almost unknown singers, M. Ticci and Alfredo Brondi (Od. 37759/60) sing with fine style and conform strictly to the score, even to the extent of a well-executed trill from the bass. Only the acidulous vocal quality of the soprano makes this version less than ideal. Perhaps this accolade might have gone to that heard in the Metropolitan Opera House in January 1903 when the voices of Johanna Gadski and Edouard de Reszke were caught on four Mapleson cylinders (re-recorded onto IRCC 168) in sections of the duet including the final allegro moderato unrecorded elsewhere. Despite the pri¬mitive recording, which must render it hors de combat, it is possible to appreciate the superlative singing offered by both artists. It is left to the Germans, Paul Knüpfer and Barbara Kemp (Poly. 65268; LV 13) to provide the most complete as well as the finest version in acceptable sound. They sing with rich authority and complete command – all the dynamic markings are observed; it is a real joy to hear two singers blending such firmness of attack with so much finesse. Knüpfer also recorded this duet with Helene Offenberg (Gramm. 044159/60; CO 352) who has a soft-grained, pleasant enough voice. Although she sings well throughout, the concluding bars, stretch her resources and she nowhere sounds really authoritative or important. 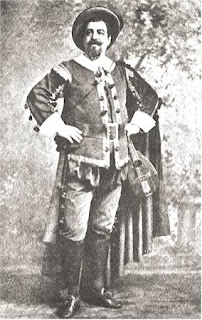 The exciting ‘Duel’ septet which follows almost immediately receives a thrilling performance by the clarion-voiced tenor Leon Escalaïs, ably supported by a cast including Antonio Magini-Coletti, Ferruccio Corradetti and Qreste Luppi (Fono. 39370; Rococo 5278). In equally vigorous, though less idiomatic fashion, Slezak leads a starry team of Viennese singers including Richard Mayr, Arthur Preuss and Gerhard Stehmann (G&T 2-44427). That neither version can be accounted ideal is due solely to the limitations of the acoustical recording process in coping with concerted voices.
A single recording of Nevers’s brief solo at the end of this scene was made by Mario Ancona on an Edison cylinder dating from 1906. Its neglect by baritones is hardly surprising since it is not one of Meyerbeer’s happiest inspirations. Ancona displays his magnificent velvet-like voice to fine effect, but unfortunately his singing in this instance is singularly lacking in subtlety and he exhibits an alarming disregard for note values.