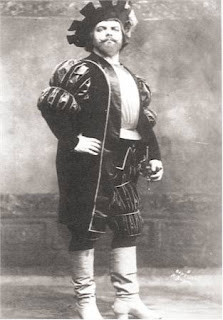 Act 4 opens with the famous concerted scene known principally for the melody of the rousing solo allotted to St Bris in the ‘Conjuration’ section, which lingered for the first half of the past century, in the repertory of many ‘Palm Court’ orchestras throughout Britain. In the following section, which really comprises the ‘Benediction des Poignards’; St Bris only sings a few phrases so that complete versions of the whole scene are relatively few. Andre Pernet (DB 5004; FJLP 5062), Pierre d’Assy (HMV 034032/032108; Discophilia DIS 376) and Anton Baumann (HMV EH 365; Top Classic H670) provide three-virtually complete renderings. Pernet’s well-recorded version displays good, solid singing without much polish; d’Assy reveals a voice of fine quality and sings with exemplary style; Baumann is an adequate if dull Getman baritone whose recording is only noteworthy for the magnificent playing and singing of the Berlin State Opera Orchestra and Chorus under their conductor Leo Blech; Jean-François Delmas (Fono. 39027, Od. 56178 and 56181) sings a slightly abridged ‘Conjuration’ and a complete finale on three sides although he can scarcely be heard on the two final discs. The great merit of his performance is that he really sounds as though he hates the Huguenots, but he does ride rough-shod over the dynamic markings.
Versions of the ‘Conjuration’ alone are fairly numerous and most have something to commend them. Delmas (Zono.2021 and Edison cylinder 2495) is again impressive but less well served by these earlier recordings~ although the cylinder, in particular, clearly indicates the sheer size of the voice; Gaston DuIiére (Edison cylinder 27105) exudes authority although his timbre is slightly coarse; Rèné Fournets (Edison cylinder 17203; Rococo 5347) has a fine, dark voice but is clumsy; Alexander Haydter (Favorite 1-25097) is also vocally well endowed and sings with great accomplishment; Journet (DB 307; GV503) spoils what is otherwise an excellent straightforward rendering by a poor final note; Sibiriakov’s (PD 4-22021) Italian training shows to advantage but despite .111S magnificent voice the performance is short phrased and inexpansive; Maximilian Maksakov (‘Monsieur Max’) (G&T 22866) provides superb legato singing, revealing a voice of superior quality with an attractive fast vibrato; Kastorsky (Amour 3-22564) possessor of one of the loveliest bass voices of his time, also sings. with a refined legato line and a wonderfully even scale; equally impressive in its way is the version by Friedrich Schorr (Poiy. 6567:3; LV 241), a perfect synthesis of authority and grandeur; Aumonier (Zono. 2083 and G&T 32103) again shows off his fine voice and sings stylishly on both recordings although the G&T is far too rushed. This fault is avoided by Payan (Aerophone 920) on his impressive rendering, which leaves one marveling yet again at the wealth of superb bass voices available in the early years of this century. Two final excerpts from this scene deserve brief mention. On Amour 322872 Kastorsky sings the linking passage for St Bris ‘Et vous qui repondez au Dieu’ without chorus, making it sound remarkably fine even though he imparts an unexpectedly Russian flavour to the music – it could have come from Boris Godunov! The voluminous voice of Nazzareno de Angelis (Fono. 74127/8) can be heard in a few interjections to the ‘Benediction’ on a disc which is mostly choral. 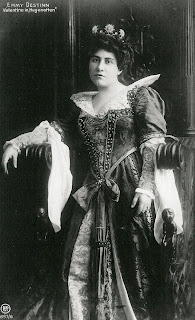 The musical climax to the opera, without question, is the great duet for Raoul and Valentine ‘0 ciel! Ou courez vous?’ which even Wagner admired. Easily the fullest version on discs is that by Laute-Brun and Affre (Od. 97512/3/4; ORX 117). Neither of them has a particularly beautiful voice, yet they sing with great ease and considerable artistry – altogether they have the right style. Affre also recorded the ‘Tu l’as dit’ section with Mathilde Comes (Pat M P. 2501) and Marcelle Demougeot (G&T 34036; GV 38) and these are also highly recommendable versions. Destinn and Jörn recorded the opening section twice (PD 2-44365 and 044079; GV 581) when both singers were at their very best – thrilling top notes from the soprano and sensitive expression from the tenor. The completion (PD 044080; GV 581) alas, is not so happy with some clumsy singing from the soprano and unfortunate intonation lapses from the tenor. Gino Martinez-Patti and Ida Giacomelli (G&T 054075) perform without sensitivity. Other poor versions include those by Cecilia David and Augusto Scampini (G&T 054179; Rococo 5263); Maria Llacer and John O’Sullivan (CoI. D 4968; Club 99.6) and Albertini and Jose Palet (DB 713). Indeed O’Sullivan and Palet are grotesque. Almost in this class is the version by Genevieve Moizan and Henri Legay (HMV HMS 93; HLP 23) in which both singers are comically over-parted. Natalya Yuzhina and David Yuzhin (G&T 2-24024; GV 63) provide the only version in Russian. The tenor is not exactly the most refined artist and additionally lacks the range required but his wife’s exciting vocal quality (Lord Harewood once aptly described her as ‘a Russian Frida Leider’) . makes their disc of more than passing interest. Maria Labia and Valentine Jaume (Edison 316B; GV 92) are chiefly remarkable for the splendour of their upper notes. Jaume sings with a fine legato style but his actual vocal quality is not entirely pleasing while the middle register of Labia’s voice also falls unhappily upon the ears. Nevertheless this must be accounted a winning version in many ways. 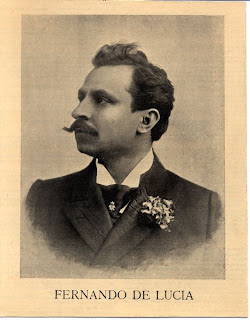 The ‘Tu l’as dit’ section (Phonotype M1816; GV 502) could justly be described as a tour de force by De Lucia. He is acco1) accompanied by the white voiced Angela de Angelis. Although it must be admitted that he indulges in considerable liberties with tempo, it is difficult to disapprove of a performance combining such irresistible elan and effortless technique. Slezak and Bland (G&T 2-44050; CO 309) combine to thrilling effect in this’ same section, which contains some of the finest singing committed to disc by these occasionally variable artists. They complete the duet in equally brilliant style on G&T 2-44033. This concluding section is exactly duplicated, on G&T 044009 where Slezak is partnered by Sedlmair. He again sings with sincerity and vigour while Sedlmair, with her first phrase, reveals the command and stature of a very great singer.

This leaves the celebrated version of the duet by Margarete Teschemacher and Marcel Wittrisch (HMV EH 734; HLM 7004 and LV 63). The music is considerably condensed, but both artists sing very well indeed with scrupulous attention to dynamic markings. Yet, fine though this record undoubtedly is, it is hardly ideal – this is one of those rare cases when artistry and fine vocalism are not quite sufficient. Wittrisch, despite his great skill and accuracy, simply lacks the grandeur of style that, for instance, Affre possesses.

Before investigating the LP & CD recordings, a final 78rpm curiosity is worth consideration. On G&T 3-32722 Jean Vallier sings Marcel’s contribution to the ‘Interrogatoire’ in the final scene. He displays a lightweight voice of good quality and makes as much of this passage as is possible when deprived of the tenor and soprano responses.