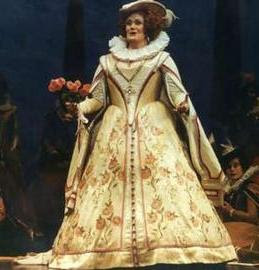 The only absolutely complete recording of the opera is from Decca (1970). The cast is virtually the same as that for a concert performance in the 1960s, mounted by the London Opera Society at the Albert Hall some time before this recording. Sadly in the interval between, the tenor Anastasios Vrenios had apparently suffered a form of vocal breakdown. Whereas his voice in the Albert Hall had easily covered Joan Sutherland’s loudest outpourings, there remains on these LPs only a pale shadow. His sound is that of a light lyric tenor, incapable of tackling any of the heroic music other than in falsetto or an unsupported head voice. To be fair to Vrenios he does sing the notes with accuracy and is clearly quite stylish but vocally he does not even begin to fill the role of Raoul. His French is also indifferent – a charge, which certainly cannot be leveled against the Urbain of Huguette Tourangeau. She provides stylish, accurate singing throughout and her second aria is especially charming, easily qualifying as one of the best on record. As Marcel, Nicola Ghiuselev sounds important, but all the vital low notes are weak and he sings without finesse. However, despite certain technical deficiencies, it is an imposing assumption. Sutherland is in fine voice and displays incredible virtuosity in her solo which opens Act 2. Here she is given two verses of ‘O beau pays’ – a bonus it has not been possible to trace in any score so far, and fine though her singing is, it has to be admitted that her early version (SXL 2257; CD Decca 425 493-2) is much to be preferred. The Valentine, Martina Arroyo, has a voice of some quality and provides several exciting moments, but far greater refinement of style is ideally required. She is also found wanting on some of the purely technical aspects of the role. The unfocused voice of Dominic Cossa makes nothing of the role of Nevers. Gabriel Bacquier’s stringy tone and lack of a true legato makes nonsense of most of the music allotted to St Bris. On the positive side both the orchestral playing and choral work is of a high standard and Richard Bonynge’s conducting is responsive and sympathetic.

Six further more-or-less ‘complete’ versions require consideration. On an ‘off-the”air’ set may be heard the performance which took place at La Scala in June 1962. Quite extensive cuts were made but at least time was found to include an abridged version of Act 5 rather than ending the opera with Act 4 as had been standard practice for some years. 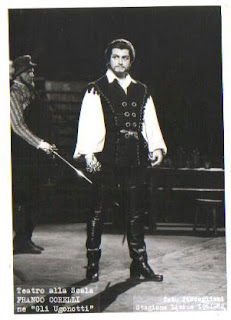 Franco Corelli as Raoul possessed one of the most beautiful tenor voices of his day, but he does not come within hailing distance of the style required for his role. Dynamic markings are ignored entirely and in some cases also the written notes. Giulietta Simionato, normally an excellent artist, apparently found this catching, for as Valentine she commits these same sins and, additionally, omits all the written cadenzas – it has been suggested that this was at the behest of the conductor. Fiorenza Cossotto as the Page does not appear to advantage and everywhere betrays her lack of a true florid technique. Even Sutherland is slightly below her best form. Nicolai Ghiaurov is a rough and forceful Marcel and the St Bris of Giorgio Tozzi is colourless. Only Vladimiro Ganzarolli’s Nevers emerges with any distinction – good, clean singing and more than a nodding acquaintance with the score. Gianandrea Gavazzeni’s conducting is generally competent although never inspired. The Act 4 duet for Raoul and Valentine generates a certain verismo, animal excitement, but this recording is not for those seeking style or elegance. These will be found in greater measure in the version conducted by Ernst Märzendorfer in February 1971 in Vienna. It is available in fine stereo sound on various ‘private’ issues and also in abridged versions. The conductor favours brisk tempi, but he is generally stylish and especially sensitive to his soloists. He is fortunate; in having as his Raoul one of the most musicianly and technically accomplished tenors of our day, Nicolai Gedda. There can be few living tenors capable of singing the role with anything approaching the .accomplishment that Gedda brought to the task. It is possible to fault him perhaps for a certain lack of charm, especially in his duet with the Queen, whilst even his most ardent admirers would: scarcely claim that he possesses a voice of sensuous quality, yet in every other way his assumption is masterly and one can only regret that Decca were unable to secure his services for their recording. Likewise one would have wished his Valentine, Enriqueta Tarres, on the commercial label. This is easily the most accomplished singing she has put on record and in the final duet with Gedda both singers rise to great heights, producing what must certainly be the finest account of this music on a modem recording. Jeanette Scovotti as Urbain supplies some breathy coloratura and a poorly resolved trill yet the voice is bright, efficient and attractive so that the final impression is a winning one. Rita Shane, Marguerite de Valois, is too similar in vocal quality to Scovotti and lacks repose in ‘O beau pays’. However hers is a basically pleasing voice and even if her interpolated notes in alt are a mistake, she does attempt a cadenza requiring great virtuosity and brings some character to the role. Justina Diaz as Marcel has problems at the lower end of the scale and his voice is dry and hollow-sounding. Nevertheless he offers musicianly singing – a verdict which cannot be applied to the wild and woolly St Bris of Dimiter Petkov or the characterless Nevers of Pedro Farres.

Another ‘off-the-air’ version, taken from an Italian radio broadcast in 1956, features the veteran tenor Giacomo Lauri-Volpi and others in the cast include Anna de Cavalieri, Antonietta Pastori, Giuseppe Taddei, Jolanda Gardino, Nicola Zaccaria and Giorgio Tozzi. Only Taddei and Zaccaria emerge honourably from the travesty of the score here presented. Some idea of the quality of this performance can be sampled from the excerpts issued in the fifties by Cetra. On EP 0344 Lauri- Volpi can be heard singing ‘Plus blanche’ .and the Raoul/Marguerite duet with Pastori. It is a sorry memento of a’ once-great voice, for the solo is without style and the once attractive vocal quality and fine breath control have vanished. The soprano is merely adequate and both this record and the complete recording are best forgotten. Even in this age of low vocal standards it is astonishing that any company should have considered this performance worthy of reissue. To see and hear Lauri-Volpi at his finest, catch a YouTube film clip of him in action from a Verona performance in 1932 in which he sings the ‘Tu l’as dit’ section of the duet as beautifully and imaginatively as one could hope to hear. 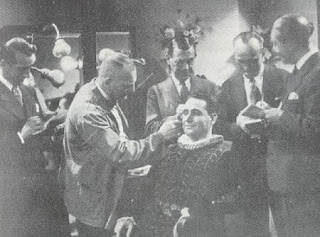 In the fifties a two-disc, abridged version of the opera was issued in France. Originally on Pleiade P 3085/6, it later appeared on Vega 80-018; It featured Renee Doria, Jean Rinella, Simone Couderc, Guy Fouche, Adrien Legros, Henri Medus, Charles Cambon and the Orchestre de l’Association des Concerts Pasdeloup, conducted by Jean Allain. It is puzzling indeed to know why this set was issued for it merely provides an example of the low standard of French singing in that period, The tenor’s ‘Plus blanche’ has been excerpted onto Vega 16.243 enabling one to experience his unsteady voice, which comes to grief in the cadenza, without enduring the whole work. The only member of the cast to attain an acceptable standard is Doria, who, possessing a generally pleasing voice, alone appears to have a feeling for the correct style.