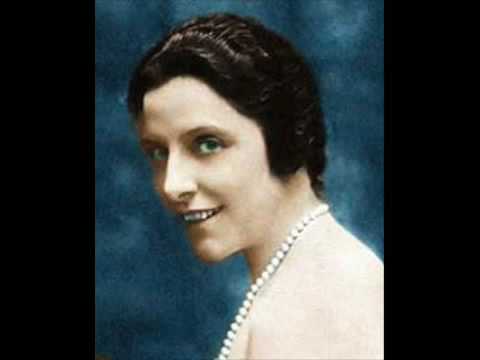 „Farrar farà.“ – and she did. Yet, apart from her great beauty which had German Archdukes, world famous singer colleagues (Caruso himself among them), conductors and movie stars falling for her, Geraldine Farrar was not a beautiful women who merely toyed with being an opera star, but one who took her profession seriously (advising young singers to be ready „to work like slaves“), yet without a doubt a true prima donna. Everything she did was in grand style. She originally studied in Boston later in New York with Emma Thursby, in Paris for just a short time with Matilde Marchesi, before turning to Lilli Lehmann for some finishing touches. In Berlin she created a sensation after her 1901 debut as Marguerite in Faust using Berlin as a springboard for her European career. Her debut at the Metropolitan on opening night of the 1906 season, as Juliette immediately affirmed her status as a box-office magnet. She remained at the Met until 1922. For a time, Farrar enjoyed immense success as a silent screen star between opera seasons, and after her retirement from opera (at the age of 40), she continued to appear in recitals until 1931. She spent the rest of her very long and colorful life as a “living legend”.

„She was not the possessor of a voice that was particularly flowing and free, a thing which she admitted herself. But she had a will of iron and succeeded always in triumphing over all obstacles.” Recalled Giulio Gatti Casazza.

“When I go on stage,” Farrar herself explained once, “everything is mathematically placed in my mind. I have diagrammed every bit of the opera, the work of the other roles, the orchestra’s part, my own business; there is nothing left to chance.” She insisted on total preparation to achieve spontaneity and freedom on stage.

Her Faust aria might be a little wanting in exactness and brilliance, but it shows a full lirico-leggiero with good agility and a natural feeling for elegance and delicate phrasing with just the right dosis of personality.