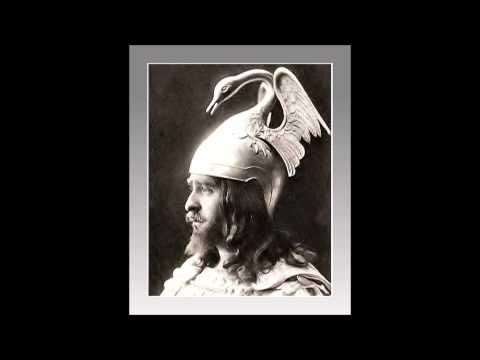 „His height, his build, also the size of his voice suit him to the great heroic roles…The voice is admirable, it is at once very large and of a charming delicacy, at times even caresses. He has a good pronunciation, his phrasing is expansive, perhaps on occasion a little too much so… Above all he has that great quality: his is a natural voice; he sings without effort and without having to fake a brazen effect, for his is a clarion voice from bottom to top.“     Emma Albani

Paul Franz was born François Gauthier in 1876 in Paris and started to study singing only at the age of 30 (!) years of age. After winning a contsts of amateur singers and his debut as Lohengrin in Nantes he joined the ensemble oft he Opéra in Paris, where he remained 1938. He was much acclaimed at Covent Garden where he sang between 1910 – 1914 (Raoul, Julien in Louise, Radames and Otello). In 1915 he appeared at La Scala and in 1918 at the Teatro Colón in Buenos Aires. An engagement at Bayreuth was impeded by World War I. His Wagnerian repertoire included Tannhäuser, Parsifal, Stolzing, Siegmund, Siegfried and Tristan. After his stage farewell he was appointed a professor at the Conservatoire National de Paris. He also was a composer and translated the lyrics of German lieder into French. He died in Paris in 1950. Of the Italian repertory his only roles – as far as I know – were Radames and Otello. And it is a pity that he only left us a „Celesta Aida“ – though this must be considered a reference recording. A clarion voice by nature from top to bottom, as Albani describes it, yet his singing is flexible and nuanced. Admirable singing from top to bottom range, from the first to the last note. Noble phrasing, manly ring, heroic phrasing, but never sounding forced or blunt.