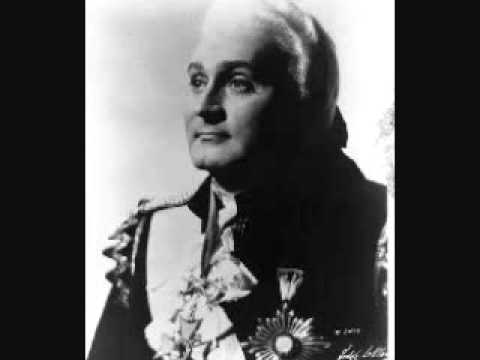 This is the last „puntata“ of our Verdian tenors and we are closing it with a tenor who is most appropriate for this occasion: Richard Tucker. Ever since his debut in 1945 Tucker belonged to the leading tenors in every repertory he sang. And I think we can safely say, that he was America´s greatest spinto-tenor ever. Vocally he not only outlived many tenors of his own generation, but also of the following. When he died in 1975 at the age of 61 of a heart attack while resting before a joint concert with Robert Merrill in Kalamazoo, Michigan, he was still singing regularly, although he had begun to limit his performances,. His voice – as is there for all to hear – still was in remarkable shape, after thirty years of singing heavy roles. He always gave 110 percent and although friends warned him on several occasions to give less, he wasn´t able to spare himself and did not want to hold back anything from his audience. Tucker was, in my opinion, one of the most consistent singers in his repertory. Rarely a bad nicht, rarely a cancellation. When he did have a bad night he might not have been all inspired and singing excellently, but he was still good. His solid rock technique always stood him by. Having started with Traviata and Rigoletto in the late 1940, Ballo and Simon Boccanegra soon were to follow. Then came Don Carlo and Forza del Destinoin the early 1950s, but always returning to Alfredo and the Duke inbetween to keep the voice flexible. Manrico and Radames were added in the early 1960s, some years later he added Rodolfo in „Luisa Miller“.

Asked fot the „secret of his success“ he said: „A happy home, conditioning, guidance by your teachers to study the right roles and of course a little mazel – luck, as we call it.” Tucker also knew how to say no. He guarded his vocal resources carefully, never accepting roles too heavy for his shining, lyrical instrument until the time was just right. Tucker´s strength was his intelligence as a singer. As Alvaro or Manrico there were voices which were louder and heavier than his, but he knew how to create a dramatic effect and excitement by adding dark colours, „accenti“ and slancio without putting the weight on the vocal chords. He could sculpture phrases in the most difficult tessitura which were solid as a rock and absolutely effortless. There are some phrases, like here in the „Ballo“-aria, where you can hear a little how he worked on them to get them perfectly placed, like „chiuso ho la tua memoria nell´intimo del cor“ or „come se fosse l´ultima ora del nostro amor“. When Sir Rudolf Bing took over the MET in 1950, Tucker was the first tenor whose services Bing seeked to secure, knowing, that such a reliable and versatile singer was irreplaceable. And we can say with Rudolf Bing: „Tucker in any era would have been outstanding for his consistent brilliance”