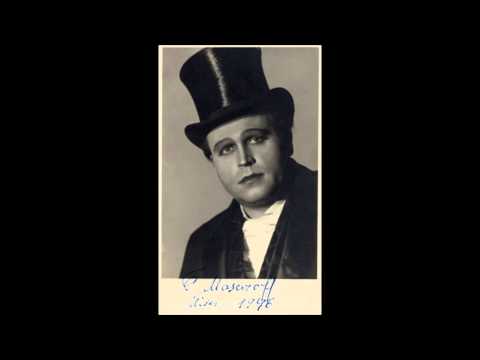 Mazaroff (Masaroff) was born in Pavel Banja in Bulgria on 2 January 1907. He began his career with the Sofia National Opera making his debut in 1935 in a production of Prince Igor. In 1937 Mazaroff won a singing competition in Vienna and so impressed Bruno Walter that he was immediately awarded a contract with the Vienna State Opera. His debut was on September 9, 1937 as Radame s. Since he spoke only Bulgarian at the time, his first roles there were sung in Bulgarian while the rest of the cast sang in German. He remained active there until 1953. Due to the outbreak of World War II he was unable to develop an international career. In 1939 he appeared at the Maggio Musicale as Arnoldo with great success and repeated the role at La Scala and the Rome Opera. International appearances took him to La Scala, La Fenice, Prague, Moscow, Paris, Buenos Aires, etc. His appearances in the United States included Chicago, New York and San Francisco. While teaching at the Conservatory in Vienna between 1962 and 1964 he retired from singing in 1963. He gave his farewell tour in Bulgaria in 1968. Todor Mazaroff died in Vienna on September 19, 1975. 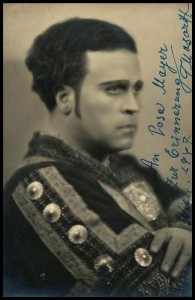 This excerpt with Maria Reining is actually from Mazaroff´s very first performance (singing in Bulgarian, while Reining is singing in German) as Don Carlo at the Wiener Staatsoper. What a voice. In these years when emphatic singing was „en vogue“ (Lorenz, Rosvaenge, also Pertile) Mazaroff did follow this „vogue“ only to a certain extent. and  A beautiful timbre, a rich spinto voice pouring out freely and effortlessly, but not sounding over emphatic and remaining essentially elegant and restrained.