Olga Peretyatko is currently singing Gilda at the Met. Having won 2nd place in Operalia in 2007, her career has taken off on an international level in the last 5/6 years. Violetta, Elvira (Puritani), Gilda, Adina are her daily bread. She has already (!) arrived at a point where she can chose what and where she wants to sing. Sony has just released her third (!) CD. She is featured in glossy magazines, she likes to wear Gucci, Dolce & Gabbana and Prada, but also Gaultier and Lanvin. So the ingredients for a primadonna are pretty much all there.
The singing?
The voice is not huge, but carries ok. It is firm and without much shrillness (yet), but it lacks a characteristic timbre and real charm. Her trademarks are most of all a solid and easy upper range, solid high notes – though exposed top notes can sound squeezed – and ok agility. No real firework coloratura, rather a lyric coloratura opting very much for brilliant sound. A firm and well trained voice in the upper register – better than some others around – but the middle range is not as well developed and has less focus and agility in comparison (listen to „Una voce poco fà“ on YT). There´s little individuality: not as a singer and least of all as an interpreter. Her diction is her weakpoint. I´d go as far as saying, that she seems uninterested in phrasing or expressing the text. Her Lucia sounds very much like Violetta, Gilda or Elvira. She is no stylist, she does not convey great emotions, there is little light and shade in her singing, the phrasing is largely unimaginative:
everything is subordinated and sacrificed for „sound“. 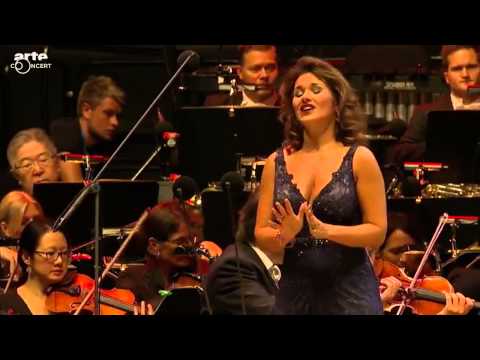 Now apart from Peretyatkos´s poor diction in general, her French is far from ideal as one can hear in Juliette´s waltz – but neither is Roberta Peters´. Yet, though her pronounciation is not ideal, you UNDERSTAND what Peters is singing and you sure understand at least, what language she´s singing in… Peretyatko sings this light and delightful waltz just very straightforward, with too much vocal weight, no shading, no tiny little ritardandi, no real feeling for the music. And then she inadequately stretches and bathes in „Loin de l’hiver morose / Laisse-moi sommeiller / Et respirer la rose / Avant de l’effeuiller“. Her Juliet sounds like the puppet Olimpia: just another showcase piece do demonstrate her talent – not much more. I find the last half from 2:20 on and especially from 2:49 monotonous, heavy and dull. Does not convey anything of girlish lightness and ease. And her final note seems not to have been in real accord with the conductor.

Roberta Peters neither had the brilliance of a Sutherland nor the noble elegance of a Galli Curci, nor was she exactly something who dived deep into a character, but here she has something that Peretyatko in comparison completely lacks: real charm as an interpreter and a very good feeling for the music, the timing and the mood. Vocal charm and girlishness is what is indispensable for the part of Juliet in the early stage of the opera. Peters keeps the voice light, but not puppetish. Her singing has far more freshness, elasticity and flexibility, her coloratura is more exact and has more more flow and effortlessness than Peretyatko´s.

And as a little „bis“ listen to how healthy her voice and her singing still was as late as 1989 when she was nearly 60. Let´s see what Peretyatko has to offer in 25 years…