I have often wondered, why this recording from 1950 has been so unjustly forgotten – despite the great Carla Gavazzi. 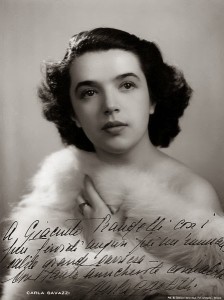 Probably, because, apart from her thrilling Minnie – which I´d go as far as saying, for me is the point of reference in a complete recording – the only interesting aspect might be Basile´s conducting. Both Campagnano and Savarese are no more than solid, in certain passages, especially Savarese, not even that.
But Gavazzi is just great. Nuaned, finely shaped, never a dull moment, always absorbed by the role, incredibly spontanuous, but always in control. Never a dull phrase. Just listen to her hairraising „è mio quest´uomo, è mio!!!“ in the poker scene – then, of course, comes Savarese´s bellowing „Ah, come l´ami!“, or her „tre assi e un paio“. Or in the finale, when she addresses the workers, asking them for forgiveness (from minute 4:00 on) – how she finds a different tone for each of them. She has both the subtleness and the passion and the power required. Maybe more incisiveness, vibrancy and intensity, rather than power, but the cutting edge in her voice is more than sufficient. Great phrasing, great colours, GREAT DICTION. „L´arte del DIRE“ – The Art of making the words she´s singing come alive. A passionate and thrilling Minnie, with just the right dosis of sensuousness and sensitivity. A great Minnie, a great singer.