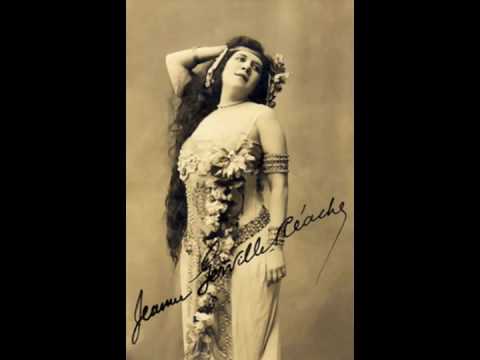 According to several critics hers was “one of the most beautiful voices of the century”. The voice was a beautiful, burgundy-coloured true contralto of remarkable power and with a wide vocal range, yet capable of great dynamic nuances.

Through the intercession of Emma Calvé, he was able to finish her studies with Pauline Viardot-Garcia. In 1899 she had a successful debut at the Opera-Comique in the title role of Orphee et Eurydice, and on April 30, 1902 she created the role of Genevieve in Pelleas et Melisande there. In the early years of the 20th century, she sang in Brussels and at Covent Garden before her début with the Manhattan Opera Company in New York as La Cieca in La Gioconda (1907), with Lillian Nordica, Giovanni Zenatello, Mario Ancona, Adamo Didur and Eleanora de Cisneros. At the Manhattan, she was well received in Massenet’s La Navarraise, not so successful as Carmen, but she created a true sensation in Samson et Dalila. When the Manhattan Opera closed down, Gerville-Réache appeared with the Chicago, Philadelphia and Montreal companies, but mostly sang in extensive recital tours and as soloist with symphonies throughout the United States. She was at the height of her powers, having just been signed by the Met, when she died in 1915 at the early age of 32 of food poisening causing a ruptured apendix, which in turn, brought about a miscarriage.