Now, she does not sing bad, but the voice is not well equalized; it´s a hard voice, driven and squeezed at times. Little colours, little feeling really apart from small sighs and shrieks.

„Je ne suis que faiblesse et que fragilité“ and „On tient, c’est inimaginable…Si peu de place… en se serrant…“ and „ah pauvre ami, comme il m´amait“ sound „made“, exaggerated and fake in comparison with Schöne. Too much show-off, too little intimacy for my taste. I have to say that this ascolto comparato – both sopranos real „stars“ at their time – really lays bare and unmasks the enormous difference in both singing and interpretation between the years 1929 and 2014. 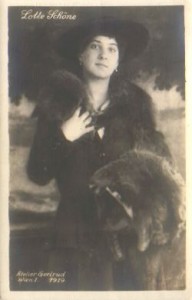 f that time. The day was December 15th. The year varies. Mostly it is 1891, sometimes 1894, when she became French citizen the birth date was given as 1893 – on this occasion it was also noted that her original birth certificate had been lost. While she soon had her mind set on becoming an artist – an idea which her mother eventually supported – the rest of her family wanted to see her settled and married. Lotte did both. She became on of the last students of Johannes Ress (1839-1916; teacher of Erik Schmedes, Melitta Heim and  Selma Kurz, among others) and married Paul Schönwälder in 1911, giving birth to a boy in 1913. Her artistic name might well be a the short form of her husband´s name.

Her first operatic performance was at the Vienna Volksoper as Brautjungfer in „Der Freischütz“. She advanced to the Staatsoper in 1917 debuting as Frasquita alongside the Carmen of Gutheil-Schoder and the José of Alfred Piccaver. Both Vienna and Berlin had signed her up for eight seasons before she had to leave Germany in 1933 (447 performances during eight seasons in Vienna, 476 in Berlin). Festival appearances in Salzburg, France and occasional appearances in London, Florence, the Netherlands and Budapest soon were to follow. However she did not like to travel too much. She seems to have had a most harmonious family life and a happy marriage. She was famous for her Cherubino and Susanna, Oscar and Urbain, Musetta, Norina, Adina and Adele. She was equally lauded in lyric roles like Gilda and the Goose girl. Her lively Papagena, Blonde and Philine were exemplary during her early years in Vienna. Her eight years in Berlin were the early apex of a career that was to be tragically cut short by persecution and exile. In Berlin she no longer sang Papagena but Pamina; she sang her first Mélisande and Liù in the first performance in Germany. Butterfly was a further extention of her lyric expressivity. Lotte Schöne was also a splendid operetta singer full of wit and charm and a superb lieder singer, much admired by Richard Straus. When she gave her farewell performance on June 12, 1933 as Gilda (conducted by her old friend Leo Blech) she received a standing ovation. Her audience knew she had to leave and they also knew why. Lotte Schöne flew to Paris where she sang both at the Opéra and the Opéra comique, she even appeared at the Salzburg Festival in 1935 and made concert tours in Europe. But when the Germand occupied Paris she fled to the Basses-Alpes in Southern France where she was hiding until the end oft he War.In the meantime she had married a second time. She tried to continue her career afterwards and gave some concerts, but she was 55 already – and times and manners in opera had changed… Lotte Schöne died in Bobigny near Paris on December 22 or 23 1977.

Flexible, charming, utterly feminine (una donna per vero!), alluring, heartfelt, intimate and often an engaging smile (Norina and Adele!) – are the terms for Schöne´s voice and especially her singing. A feminity – touching and sensual at the same time. She shared Elisabeth Schumann’s roles but she had more profound lyrical possibilities and a better agility. Her „petite table“ from Manon is one of the most beautiful and touching renditions ever recorded. Yet, she never sang the role on stage, not least because of the challenging Saint-Sulpice scene. Take last part of the recitative from „Ah malgré moi, se sens couler mes larmes“ and the whole aria. Sensual, vibrant, NEVER lachrymose or vulgar, always heartfelt, sincere and intimate.