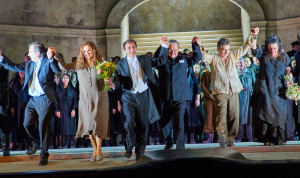 The musical standard of this premiere (standard of today, mind you…), which received RAVE critics, was no more than what a standard repertoire (today) performance can sound like. Choir and orchestra were pretty often not in harmony. Conductor Armiliato – said to be among Netrebko´s very favourite conductors (and one easily hears why) – not lets his reigns way too loose but gives up musical „direction“ alltogether: especially during Netrebko´s arias everything is getting slower and slower. She is having such a hard time manoeuvring her heavy voice and she is so little musically disciplined, that she is not able to keep a tempo for more than a few beats. Armiliato is following her, he is getting even more slower and the whole thing becomes unbearable. – What the critics praised to be the high-point was really a succession of beautiful sound singing a beautiful music: the „D´amor sull´ali rosee“ had some beautiful phrases, true, but it was there where it showed most clearly, how little Armiliato was in command of a „structure“, a musical shape – an ability to be „in command“. The temnpo is so broad and slow that, of course, she gets into trouble with her breathing. Her inbetween breaths, her breathing into the middle of a phrases is really at times amateurish. The cadenza is soooo sloooow so mercilessly stretched that one hardly recognies it This annoying tendency on Netrebko´s side to drag the tempi, to not be able to keep a tempo is really a sign of bad muscianship and little vocal discipline and certainly would call for a conductor to make her follow HIS tempi and not the other way round…… . While she did have some beautiful phrases – her „come d´aurato sogno / fuggente imago“ before „Tacea la notte“ had a beautiful lingering quality, she usually falls into the trap of looking for winning the easy way: beautiful sound, full, big notes, straight forward singing with some but too little nuance and shaping of a character through the singing. The low point was the „Miserere“. True, the difficult aria followed by the cabaletta „Tu vedrai che amore in terra“ and then the „Miserere“ are among the most challenging scenes for a soprano in this repertory. The „Miserere“ not only called for her last reserves, but mercilessly showed Neterbko´s pushy and badly developed lower register. One also hears, how upper and lower register are slowly starting to drift apart – though this is nothing compared to Luciana D´ Intino´s HUGE gap between her upper register and her lower one…
Alagna threw in all his routine and stamina, but sounded throaty, strained and effortful and often highly at risk, giving everything he has – and more. (He seems to have sufferad from a cold in the past days…) A definite low point (especially from Alagna) was the „E deggio… e posso crederlo“ trio with three voices not blending at all and sounding badly rehearsed leaving one asking oneself, what they have been rehearsing during the past weeks… „Ah si ben mio“ sounded tense and nervous with no line and strange change of tempi (which Armiliato, again, only followed too readily). Alagna did not even attempt to do something similar to a trill. The stretta saw him crack the first time on „con tEEEco alemno“, the final top note was thin and on the verge to a crack. „Ai nostri monti“ sounded strained and roughly sung with no softness.
Ludovic Tezier was very dissappointing. Trying hard to sound like a pocket-Bastianini he scoops and roars in a way that is hard to bear. The aria was badly structured, just going for „sound“ and „Udiste… Mira d´acerbe lagrime“ was crude and rough.
Luciana D´Intino has a pretty secure high range, but a huge hole in her middle range, the lower one sounding terrible.
Jongmin Park´s narration of Ferrando story is nuanced, though not refined, but he works the text better than all other singers, although his singing is a little in the rough side.
Armiliato´s reading of the score was neither thrilling nor did it offer any new perspectives. I would not even say he really accompanied the singers well – most of the time he seemded to hobble behind them or just sounding loud and lurid or having a hard time of managing the choir and keeping everybody together. Definitely not the musical standard of a premiere where thorough rehearsing has to be expected.