Dominique Meyer is not exactly blessed so far with his artists during this season. After Welser-Möst and De Billy left the Staatsoper, the recent Don Carlo (Italian Version) is is really dogged by bad luck.

The first performance on Sept 21st saw an indisposed Elena Maximova, who was replaced by Monica Bohinec. After the second act Giacomo Prestia suddenly lost his voice and Sorin Coliban took over the singing, while Prestia continued to play the role. 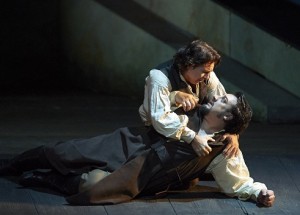 In the second performance on Sept 25th Maximova was well again for her role-debut and Coliban sang Filippo from the beginning. Alagna was said to have given a decent performance so far, but suddenly was caught by an indisposition. Before his entrance in the third act, Meyer had to inform the public that his tenor was unable to continue and that there was no replacement. (Second casts in Vienna usually go home once the opera has started and all singers are on stage…) In order to not send the public home immediately Meyer announced to have Posa’s death without the tenor and Elisabetta´s aria. George Petean sang „Per me giunto“ and after some misunderstanding with the conductor finally went on with Posa’s death. Then, after the Elisabetta-aria the curtain fell. When Alagna had had very simular problems during a Don Carlos (French) some years ago in Paris, they were wise enough to have his cover wait in the wings until the end.

Whether Alagna will sing the remaining two performances on sept. 28th and oct. 2nd is still unclear.