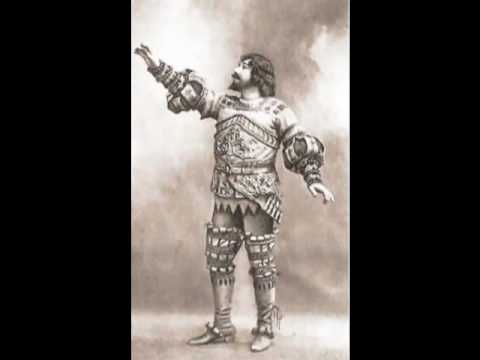 Francesc Viñas i Dordal (27 March 1863 – 14 July 1933) was born in Moià, a small town near Barcelona. At the age of 23 he started to take singing lessons at the Barcelona Conservatory where he studied under Gonçal Tintorer. After hearing him in some of the conservatory’s concerts, Juan Goula a principal conductor at the Gran Teatre del Liceu, urged him to study the title role of Lohengrin. 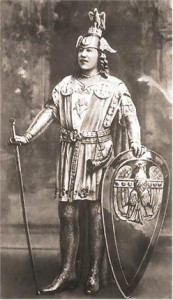 In fact, Vinas went on to make his operatic debut at the Liceu on 9 February 1888 in Lohengrin, which was to become one of his signature roles.Julián Gayarre was in the audience at the Liceu for Viñas’s debut and was reportedly so that he gave Viñas his own Lohengrin costume. Other Spanish opera houses and engagements in Italy soon followed. In the space of three years he sang Lohengrin 120 times. He debuted at Turin’s Teatro Regio in 1890 and at Milan’s La Scala in 1891, both times as Lohengrin. In 1893 he made his Covent Garden debut as – Lohengrin – with Nellie Melba, in the same year he made his debut at the Met as Turiddu. And it only seemed natural that he was closing his Italian career with performances of Lohengrin in Bologna (1913) and Parsifal in Pisa (1914). (He was announced to sing Tristano at the Teatro Adriano, Rome, late in 1914, but these performances seem to have been cancelled by the outbreak of war.) He died of lung cancer in his hometown.

A silvery, yet manly voice, with a free, clarion sound. A no fuss singer with a very classical and straight approach to his roles, which shows him at his best in this Otello excerpt. Never forced, always on the breath and with a remarkable seamless vocal consistency throughout the range. Maybe not the most nuanced singer, but an impressive and steady upper register with great ease, great power and a great ring .