I find Dorothy Kirsten a fitting counterpart to Kristine Opolais as Manon Lescaut, which is due tomorrow at the Bayerische Staatsoper. Both are/were regarded good actresses and good looking women and their vocal potential actually is very simular. Both voices are not outstanding in size or beauty and both sopranos are/were much acclamímed Puccini singers, having the role of Mimì as a calling card. Opolais actually has more colour (though some of it is „made“) and body, but the voice is shorter and her singing has much less skill and control, which you need here: You need a lot of breath and great, expansive phrasing and imaginative phrasing to draw the line from „ed io che m’ero avvezza“ to „or ho tutt´altra cosa“ (listen to Kirsten – how good and clever she does it!), but you also need the delicacy for phrases like „v´è un silenzio, un freddo che m´agghiaccia“ or  and „o mia dimora umile, tu mi ritorni innanzi“ and „come un sogno gentile di pace e d´amor“. Where Kirsten was fifty in 1960 here, Opolais is thirty-five. Yet, listen how fresh Kirsten still sounds all in all, while Opolais´ voice sounds much older and worn than she actually is. How much less spontanuous and elastic her voice is compared to Kirsten´s, which is higher placed and good on the breath which gives it good carrying power and elasticits – and especially much clearer diction. 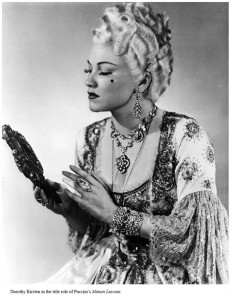 Kirsten came from a musical family: her mother was an organist and music teacher, her grandfather was a conductor, and her great-aunt, Catherine Hayes, was also an opera singer. She left high school at age 16 and started to work, studying voice in her spare time. By the late 1930s she had a career as a radio singer. Grace Moore made her study in Rome with Astolfo Pescia. After the outbreak of World War II she returned in 1939, making her debut at the New York World’s Fair. In the early 1940s she appeared in Chicago (Manon, 1940), the San Carlo Opera Company, New York City Opera, San Francisco Opera, the Philadelphia La Scala Opera Company. Her debut at the MET, where she was to remain for the following 30 years, took place in 1945 as Mimì. Her last performance with the Met was on February 10, 1979 as Tosca.

Opolais is new to the role, having made her debut at Covent Garden only this year. She steps in for Anna Netrebko, who left the production after a disagreement with Hans Neuenfels.

Opolais has the terribly annoying habit of colouring the vowels to make it easier – all ooooaaooo. She has such a low placement and thus the voice has a very guttural sound – much en vogue now – because it makes the voice sound fuller and darker at the cost of flexibility and carrying power. In her singing she fakes a vocal fullness and a vocal weight she doesn´t have. Thus „her“ aria sounds as follows:  she starts with a shaky „ ooon quollo tronoo morbodooo“ and  „on goolödoo mortoool“, where she breathes where there should be no need to breathe: „v´è un silenzio, un gelido /breath/ mortaaaal, /breath/ v´è un silenzio, un freddo /breath/ che m´agghiaccia“. At „ed io che m´ero avvezza“ and „infocate braccia or ho tutt´altra cosa“, the voice sounds driven and rattling. She ends with „di pooocööö öö d´oomooor. The voice sounds hollow and she pumps it up artificially which makes it sound unnatural and most of all it makes her diciton hazy and unintelligible. Hailed as a great stage actress, she fails to „act with the voice“ – partly through lack of imaginative singing, partly because her limitations as a singers do not allow it: she tries hard to keep the line, but in comparison with Kirsten, it is the American, who „leads“ the music, while Opolais just „follows“ and drags behind the conductor. And that´s what makes all the difference.