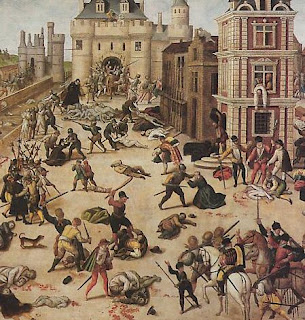 On Erato CD 2292-45027 is a nearly complete live recording with a mainly French cast from Montpelier in 1988. One exception is the Raoul, American born Richard Leech. He sustains the role creditably without perhaps offering the ultimate in refinement. The others are Boris Martinovic as St Bris and Nicola Ghiuselev as a huge voiced but rather rough and gravelly Marcel. Valentine is the soft-grained Francoise Pollet who, except for a general feeling of placidity and some slight intonation problems, is pleasing in most respects. Ghylaine Raphanel as Marguerite tends to the acidic in alt but is acceptable by current standards. Danielle Borst’s Urbain is technically challenged by the page’s entrance aria and it is perhaps as well that her second air is omitted. Gilles Cachemaille is a rich sounding Nevers and a stylish singer. Diederich’s conducting is respectable and the set can be generally recommended as presenting a reasonably enjoyable and honest traversal of the score.

A French radio broadcast of a live performance from around 1990 (DPV CD 30 9009) is conducted by Henri Gallois. It suffers the usual cuts and features Louis Lebrun as Marguerite, Kathie Clarke as Valentine, Della Jones as Urbain, Alain Vanzo as Raoul, Will Roy as Marcel, Robert Massard as Nevers and Jules Bastin as St Bris. Most interest is likely to be centered on Vanzo – one of the finest French tenors of his time. Although his basically light lyric voice is quite unsuited for the role, he is never less than interesting and by resorting to mezza voce, head voice and occasionally falsetto, almost manages to persuade the listener otherwise. His Valentine is merely adequate, sounding muffled much of the time, as if in a different acoustic. Her words rarely come through. Massard offers a strongly voiced Nevers but the elderly sounding Marcel and St Bris are barely adequate. Fortunately both the Marguerite and Urbain are excellent making one regret the absence of the page’s second air. Conducting and orchestral playing are of provincial standard and there is little feeling for the overall shape of scenes or of the whole work.

Another broadcast, this time from Vienna in 1955 (Walhall WLCD 0169), features Robert Heger conducting a version in which fewer than usual cuts have been made. It is sung in German with the lyric tenor Karl Terkal as Raoul. He is no Wittrisch although he sings strongly if without much imagination or real style. His colleagues include the wonderful, black toned bass, Gottlob Frick as an impressively fanatical Marcel. The young Walter Berry is a rich voiced St Bris whilst the Valentine, Marguerite and Urbain are sung by Maud Cunitz, Valerie Bak and Eta Kührer respectively. Cunitz offers a rather more animated and steady-toned interpretation than usual. Bak’s voice has a slightly infantile quality and her technique is not really adequate but she occasionally surprises with moments of sensitive singing. The voices are clear and forward but the orchestral sound is often muddy. There is a continuous, low-level, background noise which becomes tiring after a while. Heger’s conducting is sluggish and this German version sometimes gives the impression that the work is by Weber or Nicolai. 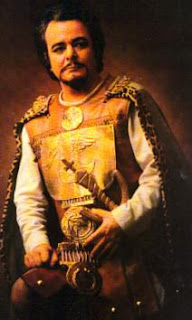 Single excerpts from the LP and CD era are mainly confined to the tenor romance, Urbain’s solos, two arias for Marcel and the Act 4 duet. Five versions of ‘Plus blanche’ have been heard and of these only that by Alfredo Kraus (Carillon CAL 1) comes near to the required style. He commences most sensitively and sings generally with understanding and elegance but towards the end of the aria his lack of a true mezza voce and florid technique brings disappointment. Franco Corelli (ASD 541) offers a marginal improvement on his stage performance but it remains inelegant singing. Tony Poncet (Philips 837065GY), Alberto da Costa (Concord 3004) and Mario Filippeschi (Col. QC 5029) display enormous lung power but virtually no regard for the score. In fact da Costa sings the entire aria in an unremitting forte that is positively painful.

Marcel’s ‘Chorale’ has been recorded by Cesare Siepi (Decca L W 5169) who follows it with ‘Piff, paff, pouff. He sings both excerpts in French with strict adherence to the score. Unfortunately his actual vocal timbre, as recorded here, is not entirely pleasing and the tone becomes unsteady in the forte passages. Jerome Hines (Epic LC 3934) also betrays signs of unsteadiness in his version of ‘Piff, paff, pouff’, but it is an impressive rendering which the slightly hollow quality of his voice and aspirated runs do not entirely negate. Ghiaurov (SXL 6147) again provides good, unremarkable singing and poor attempts at the trills.

Of the four versions heard of the Page’s first aria, Janine Micheau (Col. SAXF 221), Marilyn Horne (SXL 6149). Frederica von Stade (CBS 76522) and Rita Streich (DG 19137), that by Micheau is the most characterful. It has to be admitted, alas, that her tone is sour, her trill less than perfect and the aria is taken faster than the score’s cantabile, can grazia would suggest. However she exhibits the exact teasing quality required and one is left wishing that she had been asked to record the aria earlier in her career when the voice was in its prime. Streich sings sweetly and correctly but with no attempt at characterization. Von Stade displays the most attractive vocal timbre, and moreover has a good idea of how the music should go but is let down by a tentative central section, an embryonic trill and a lack of real authority, while, conversely, Horne’s superbly accurate .and technically accomplished rendering is singularly lacking in sparkle. This is curious, for her recording of the second aria ‘Non, non, non, vous n’avez jamais’ (RCA 04609) is sheer perfection. It would be difficult to imagine a finer interpretation combining, as it does, technical mastery, a splendid voice and all the charm in the world. 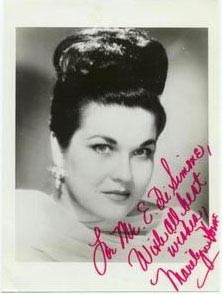 Only one modern recording of the famous Act 4 duet, Montserrat Caballe and Bernabe Marti (ASD 2723), prompts speculation as to why other famous teams of the recent past have ignored this truly splendid scena. Is it possible to imagine how it might have sounded in the care of Callas and di Stefano, Tebaldi and del Monaco, Milanov and Björling? Caballe and her husband bring their own individual accents to the music but even allowing for the dry, unheroic quality of Marti’s voice, his lack of any useful range of dynamic or nuance and his most imperfect French, this performance would still be totally destroyed by the unidiomatic and lifeless conducting. There is no forward pulse or cohesion and the music emerges as a series of unconnected episodes. Caballe is in fine voice and at moments sings like an angel but, as so often with this soprano, the impression is given that she is sight-reading the music and has no real idea of the import of the scene as a whole.

Perhaps it would not be inappropriate to end this survey by admitting that the experience of listening to so many versions of the various set pieces from Les Huguenots has resulted in an increased admiration for Meyerbeer’s talent, even if exposure to complete recordings has raised nagging doubts about the true musical value of the work as a whole. Certainly when the music is sung with a scrupulous attention to dynamic markings and with the correct blend of delicacy and power, it can be extraordinarily atmospheric. If these elements are lacking, however, as they are in nearly all the recordings made in the LP era, then the effect that the music is capable of making is almost completely nullified. It may possibly be accounted a basic weakness in Meyerbeer’s music that it should be so dependent on a correct performing style. Whereas the operas of Mozart, Beethoven, Verdi, Wagner and Puccini continue to survive successfully many rough-and-ready performances, those of Meyerbeer will not. Additionally they must have great singers, not just great voices. When this rare but happy conjunction occurs, as it does on the finest of the records reviewed above, Meyerbeer is revealed as a very considerable musical dramatist.