Ever since I first heard Domingo in the early Eighties I never understood the fuss about this singer. A mediocre voice, an interpreter with verve, good diction, good looks. So? Singing for the „Guiness book of Records“: largest repertory, longest career, biggest influence in music BUSINESS, singer, conductor, administrator, founder of singing competitions, …….. Singing his way almost through the entire operatic repertoire as he still does. He sang and sings everything and everything sounds the same: everything sounds like Puccini. ONE SIZE FITS ALL. But of the „Three Tenors“ Domingo probably has the most fiercest and most „hard core“ fan club. They adore him they forgive him everything and – one suspects –  they usually do not listen all too closely. Domingo is in good form here, in his early fourties at the MET. But the tessitura of Enzo´s aria is uncomfortable and then – you have to sound effortless and dreamilyand passionate while Enzo is dreaming here of soon being reunited with the love of his life. And although Domingo is not so bad here, but only if you have no comparison. 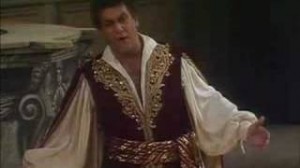 Effortlessness was never his case He is struggling through the tessitura, tries to phrase but to tell the truth, the role is beyond his possibilities („It´s easy if you sing it wrong!“ as Zinka said) – as much of what Domingo sang was really beyond his vocal possibilities. Yet he was such a clever singer. He always knew and still does, where to spare himself in an opera and where he had to „get the point“. This way he almost always made it through, but if you listened really closely: one always felt cheated on as a listener. One always had the feeling that he sang many heavy roles, not because they fit him, but to prove to his audience and especially to himself that he could master them – somehow. And this is what Domingo actually did and does: he cheats himself through difficult parts of an opera, sparing himself for those parts, where a singer hast o show his true colours and where there are „points to be made“. He always has this way of squeezing the notes from below. And the voice actually is built from below and ist natural center is very low for a tenor. Almost every note from the passaggio upwards is squeezed or pressed. Rarely have I heard Domingo not sounding strained and tight.  This way of singing is tiring, of course – as one can hear towards the end of the second verse – and one wonders how he could get away with this way of singing in a demanding repertory over decades without seriously damaging his voice. He must have vocal chords made out of steel. „Vento buono per noi“ in the recitative is squeezed already as is „Buona notte“. „Ah quel uom che vi sospira / Vi conquide, o sogni d’or!“ is tight and does not have the required abandon and broadness. As he reaches „Vieni, o donna, vieni al bacio della vita e dell´amor“ he already sounds tired. In order to give the voice additional broadness he tends to sing open and to add „grinta“ and cutting edge he colours and lightens the vowels to: a crimped eee. „Si dell´amor, si, dell´amor“ tired and „ah vien, ah vien“ are strained, but as usual he has his fans at his feet. So one cannot say that he sings badly here – in relation to his own standards! -, but „Besser ist der Feind des Guten.“, as we say in German. Listen to Richard Tucker and you will hear the right voice and the right singer for this role.

Enzo was the role, in which Tucker made his MET debut the year before on January 25th and it was one of his best roles. (It served him also well at his debut in Verona in 1947, where he in fact much overshadowed Callas´ debut.)  Although the 1959 broadcast is considered his best „Gioconda“ I found him more lyric and poetic here, almost 15 years earlier. Vocally there is not much difference between the two recordings. The voice has become a bit heavier and fuller later, but has lost NOTHING of its splendour after almost fifteen years of the most demanding repertoire. 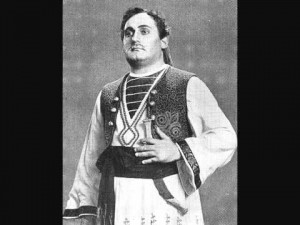 The secret to his longevity and success relied on four factors, he said. “A happy home, conditioning, guidance by your teachers to study the right roles and of course a little mazel — luck, as we call it.“ Born in 1913, he is in his early thirties here. Although his Italian diction is yet not 100% polished, there is little to criticize in Tucker´s singing. He has the vocal calibre for the role, the required ability as a singer, and he has – guts. And he had something Domingo never really had – a ringing upper register and rock-solid top notes. A totally „free“ voice, excellently trained and used – areal spinto voice and a singer to go with it. Take „sia gloria ai canti die navigAAAnti“ or „Buona nOOOtte!! The notes are hit perfectly in the middle, without scooping or squeezing. In phrases like „L’angiol mio verrà dal MAA-REE?!“ or „oh sogni, oh sogni d´or“ one hears how carefully he has studied them in order to get them „in the voice“ and how his technique should be a model for every tenor. How he bathes in „ah quel uom che vi sospira“ instead of struggling with the tessitura. Listen to  „Ah quel uom che vi sospira“ and „Vieni o donna, vieni al bacio“: where Domingo is running out of breath and power, Tucker, instead, has just warmed up and is striving forward  to reach the climax and is most comfortable in this range. A final ringing „ah, vien!“. Great, great singer.

John Steane once said, that Tucker “has a way of making you listen to him.” He has vocal authority and a commanding way of singing – a singer, who makes you sit up and remain on the edge of your seat during an entire performance. Sorely missed today.