Born in Sardinia he made his debut in 1922 at the Teatro Quirino in Rome as Ernesto in „Don Pasquale“ proceeding to the Teatro Costanzi in 1923 as Des Grieux (Massenet) alongside Carmen Melis. He scored a great success as Lindoro in „L´Italiana in Algeri“ with Gianna Pederzini at Milan´s Scala in 1932. He had a good in Italy and some guest performances in Warsaw, Amsterdam and Copenhagen. His specialties were Wilhelm Meister, Almaviva, Ernesto, Nemorino or the Duke. After WWII he changed his repertoire to more dramatic roles like Don Jose, Manrico, Maurizio, Loris and Canio etc.). He also made some films and sang the song of the prince in the Italian synchronisation of Disney´s „Snow White“ („Non ho che un canto“). He retired in 1950 and later taught at the Accademia Santa Cecilia.

Here, he is an utmost elegant and refined Almaviva. A recording I never heard before and which bewitched me on first hearing. It´s less the perfection of sound or the exactness of the notes sung (although he sings very exact – especially when you hear Florez later) that get a listener hooked – it´s the charme, the delicate ease and airiness, the deep affection of a noble man in love which Manurita perfectly conveys in this recording. His singing is light and elegant, but he is no effeminate crooner. Not for once he breaks the line, always keeps the balance, never blurting out fully, never even for a moment exggerated, always nobly holding back.

As opposed to Florez the low note in „dal mio labbro il mio nome ascoltaaatEE“ causes him no problem. His contemplative lingering on the second „che a nome vi chiamo“ is done most beautifully. Many singers just roll over the dotted notes (if they sing them at all) – as does Florez, who sings both verses the same way when the first verse really has the dotted note on the first sillable and the second verse on the second.

The second verse goes instead:

Manurita respects them as written and it sounds beautiful and makes perfect sense, yet sung without affectation and with great ease and charm. He is always flowing – no rough edges. A real delight. And I love the ending beautiful ending on two repetitions of „deeeeeel diiiii“ – one sung out – one piano. A great singer for the lyric repertoire, although one wonders, how he was able to sustain roles like Manrico and Canio towards the end of his career. 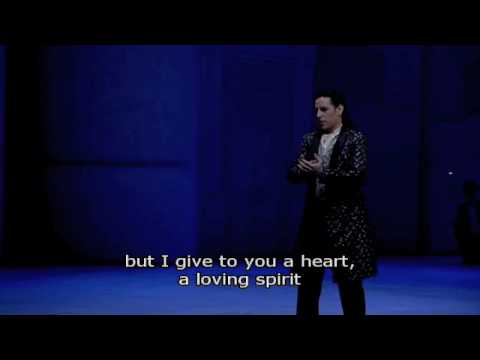 I respect Florez as a „sincere“ and disciplined singer. Each time I heard him live I was both surprised and dissappointed – and even bored. The voice is small, yes, but it carries pretty well. It´s „sound“ il rather monotone, though. He tries to do some nuances on forte and piano, but that´s about it as far as imaginative singing is concerned. Just all sung out at more or less the same volume. I do not find him a very nuanced singer, although he does some ornaments and variations. Neither does he convey real charm in his singing in order to „seduce“ his listeners. This „Se il mio nome“ is well sung, but he is much less exact and has less finish and finesse than Manurita. The second „che a nome vi chiamo“ is no real piano. He starts out with a hesitant attack – as many of his attacks are not really clean and as much of his singing is too slow and sagging here for my taste. Much of what he does sounds arty and too DELIBERATE. The form of his serenade here is rather mushy and with no real structure. There is some recurrent scooping which really need not have to be. I would even go as far as calling it a little sloppy and boring, just concentrating on making a nice sound. Much of it is monotonous and all too forthright and predictable, albeit on a high level – talking of course about the high level among today´s singers not the one of long ago.